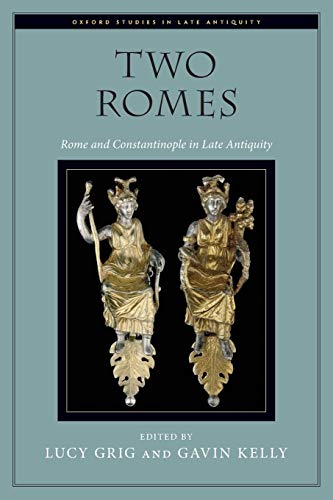 Two Romes: Rome and Constantinople in Late Antiquity edited by Lucy Grig and Gavin Kelly is a phenomenal book. It could have been another boring and dry treatise of Rome in antiquity but rather all of the essays that were included are extremely well and intriguingly written. This book is fluidly written and edited, which made it a very enjoyable read.

This book is separated into six parts discussing Rome and Constantinople in context, the urban space and development in a comparative perspective, emperors in the city, Panegyrici (public speeches and texts praising the cities and people), Christian capitals, and the epilogue discussing questions of Byzantium's Roman identity.

The introductory section called “Putting Rome and Constantinople in Context” is by far the best introduction on the two cities I have read. It was fluid, very well written, and extremely informative without feeling like they were just listing fact after fact. The second part was a bit harder to work through and understand simply because it was a lot of describing both cities' features and comparing the layout of them. Parts of it included maps and pictures that were extremely helpful in understanding and visualizing what the authors were describing. Part three was extremely well done. At the very beginning the author lays out a statement by Valentinian III about Rome that some would pass by as mere rhetoric and says that the chapter will explore the broader context of the statement. The chapter does and sheds a very interesting light and new perspective on an emperor's statement that would not normally receive such attention. Part four was something entirely new to me and was fascinating. The author begins talking about the editor Pacatus of the Panegyrici Latini and then moves into the speeches. He Shows Pacatus' purpose of championing Theodosius' dynasty as the focus of political authority and how he added his own Gallic perspective to it. He shows how Pacatus was his own representative and one for Gaul, trying to urge a sense of loyalty and steering imperial ideology towards Rome. There also is discussion of Themistius speaking of Rome and of Constantinople, Claudian of Alexandria and Constantinople, and what epic panegyric says about the turbulent politics of Rome. Part five discusses Christianity in the capitals. It discusses Constantinople in the Bordeaux Itinerary, Christianity in Rome, and the councils at Nicaea, Chalcedon, and Ephesus.

Much of the book was set up in a way that the authors would pose a question, give the previous answers or interpretations of it, explain why they were wrong, and then give their answer or the correct answer to the question that was posed. It was a very helpful way to write many of the essays included in the book. I would recommend this book to anyone interested in late antiquity as it is very well done. A bit of prior knowledge about antiquity, Rome, and Constantinople would be helpful in understanding many of the people and things the authors talk about in the book, but they do a good enough job at explaining things that most people with even a basic understanding could follow what is being said.

$77.23
free shipping worldwide
$69.25
plus shipping
By purchasing books through this website, you support our non-profit organization. World History Encyclopedia receives a small commission for each book sold through our affiliate partners.

The ancient city of Byzantium was founded by Greek colonists from...
Article

The Byzantine Empire, often called the Eastern Roman Empire or...

$77.23
free shipping worldwide
$69.25
plus shipping
By purchasing books through this website, you support our non-profit organization. World History Encyclopedia receives a small commission for each book sold through our affiliate partners.