The Horse in the Ancient World: From Bucephalus to the Hippodrome (Library of Classical Studies) 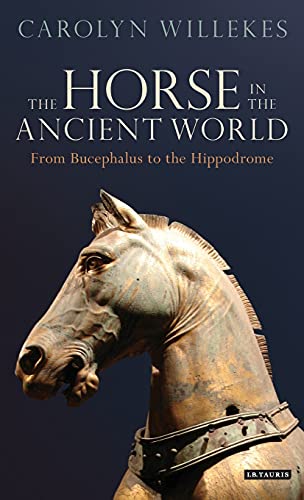 Presented in the tone of an academic work, this is an excellent resource for research. The author's thesis regarding environment driving how horses were used vs human need driving their use is interesting and well supported. I would recommend it for serious horse enthusiasts or university level students.

Most historical works covering human-animal interactions focus on the relative utility of the animal to society. Dogs are discussed in relation to war and protection of livestock herds, cats with regards to their use in the home, and horses are often associated with war, transport, and sports. The general approach often takes the human need and shows how domesticated animals have been adapted to that need. Carolyn Willekes' book, The Horse in the Ancient World from Bucephalus to the Hippodrome, focuses on the stereotypical war and chariot racing topics from the other direction. She poses the thesis that a horse's specific use in the Ancient World is a direct result of the surrounding environment and the horse's physical makeup, i.e. that humans adapted behaviors to suit the horse.

The work is presented in the tone and style of an academic paper or dissertation, beginning with a chapter on the methodology Willekes used in her research and thesis. It is excellent, thorough data: the first half of the book, from methodology through the evolution of prehistoric horse types and conformation styles, is worthwhile for anyone doing a research paper. I found it difficult to pick up and read through in one sitting, and I can likely be described as a horse enthusiast, so the average reader may be put off or skip these sections. However, I recommend not doing so. The background Willekes provides in how the horse developed over time in various environments is a direct link to how they were used by ancient societies, and this is where the meat of the book gets juicy.

The chapters on war and sport horses are stuffed with interesting ancient source material, and they do indeed support her theory. The lithe, small, tough steppe horses from central Asia are physically incapable of heavy-horse cavalry maneuvers, much less carrying a rider and armor. The idea that humans saw the resources available (light, fast, agile mounts) and worked within the horse's limits to build tactics (fast skirmishing, the famed Parthian shot) around their abilities seems utterly obvious but her particular approach is new.

The idea that humans worked within the horse's limits to build tactics around their abilities seems utterly obvious but her particular approach is new.

However, some of the data useful to provide a full picture has been left out, particularly of the chapter on war. As an example, there is little to no mention of countermeasures to both heavy and light cavalry, including caltrops, chariots, or elephants. Also, Bucephalus, arguably one of the most famous horses documented in the ancient world (and included in the title of this work) only appears in the context of the fear/aggression behavior of horses, in relation to Alexander's famous tale of gentling the fierce stallion afraid of his own shadow. The rest of Bucephalus' story, that Alexander rode him into battle many times over the course of his life and he was clearly admired for his bravery and fierce abilities on the battlefield, was omitted. It appears many of those counterpoints were left out to remain focused on the physical capabilities of the ancient horse types, but I found the omissions distracting and continued thinking about them even after I finished the book.

The sections regarding training for both war and sport were very well done. Willekes uses both historical source and a horse trainer's experienced eye to explain how much of the training could easily overlap because many of the behaviors are the same. Whether a rider was racing in the arena or staying in strict formation for the battlefield, the bond between horse and rider was built the same way. Rome, Persia, Greece, and steppe tribes all used horses differently for war and entertainment: from cavalry battle tactics to exhibition parades to chariot racing.

Carolyn Willekes is clearly passionate about horses and history and has a strong thesis about the symbiotic relationship between humans and horses in ancient societies. She has applied multiple research disciplines to back up her ideas, and she certainly makes a solid argument for the sense in this approach to judging a horse's place in the ancient world. The style and tone of her writing is heavily academic and detailed, so it may be a more difficult read for some, but it is an excellent resource. Overall, The Horse in the Ancient World is a data-rich book I would recommend to anyone looking for additional views on how ancient societies developed their particular interactions with horses.

Bucephalus was Alexander the Great's horse and is considered by...
Article

The Hippodrome of Constantinople

The Hippodrome of Constantinople was an arena used for chariot...
Definition

The chariot was a light vehicle, usually on two wheels, drawn by...

Willekes, C. (2019, January 22). The Horse in the Ancient World: From Bucephalus to the Hippodrome (Library of Classical Studies). World History Encyclopedia. Retrieved from https://www.worldhistory.org/review/203/the-horse-in-the-ancient-world-from-bucephalus-to/