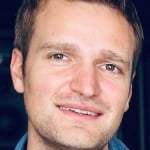 Born in London (UK) in 1989 to an Italian and Portuguese family, is an educator and writer, currently teaching at the University of Qatar, International House and Woospeak. He has lived in eight countries, including Greece, Brazil, Croatia, Switzerland and Spain. He has studied Philosophy at BA-level at the University of London and history at MA-level at the University of Birmingham. He also holds an MA in English language teaching with First Class Honours from the University of Southampton as well as teaching certifications from Cambridge University and International House, having worked for several years as a language educator and included many historical and philosophical topics in his lessons. His articles have also been published by Modern English Teacher, the Journal of English as an International Language and other publications. He has always been interested in ancient civilisations such as Ancient Greece, Egypt, Rome, Babylon and Persia, due to their everlasting charm and influence on the current sociocultural landscape.

Pyrocentric Model as presented by the ancient Greek philosopher...
Image

Melissus of Samos (5th century BCE) was a Greek philosopher from...