by Jenny Snook
published on 18 November 2020
Send to Google Classroom:

The Ardagh Chalice, one of the finest examples of Irish metalwork from the Middle Ages, was found in 1868 CE as part of a hoard at an Irish ringfort in Reerasta, near Ardagh, Co. Limerick. While the chalice is the only ecclesiastical artefact found as part of the Ardagh Hoard, this collection also contains four gilt silver brooches and a plain bronze chalice. The decorated chalice is the oldest piece in the hoard, dating back to c. 750 CE, while the youngest is a silver thistle brooch created in the early 10th century CE. Other treasures of this same period, called the Golden Age of Irish Art, include the Book of Kells and the Derrynaflan Hoard. It is likely that the hoard was buried during a time when Viking raids in Ireland were at their peak.

Known as calyx ministerialis, this kind of chalice would have been used to hold wine during the celebration of mass, most likely during special occasions. Unlike the Derrynaflan Hoard, a collection of ecclesiastical artefacts dating back to the same period, the Ardagh Chalice was not found on the site where it was created or kept. The chalice is believed to have formed part of a church or monastery treasury before it was disestablished. There are many different theories as to where it came from. For example, one theory claims it was one of the pieces stolen at the famous robbery of Clonmacnoise monastery in 1125 CE. This is just one of the rumours which cannot be proven.

Although it is not known exactly why this hoard was buried & left underground, the most popular theory is the fear of a Viking raid.

There would have been several skilled craftspeople involved in its creation, with outstanding skills in metalwork and glasswork. Excellent eyesight would have been another necessity. This makes it most likely that it was created by a number of high-status churchmen. There are some similarities between the gold filigree decoration on the chalice and the similar filigree decoration featured on the much-celebrated Tara Brooch (c. 700 CE), which makes some people suspect that these pieces were made in the same workshop. Although the Tara Brooch is reported to have been discovered near Bettystown, Co. Meath, where it was created is unknown.

The brooches of the Ardagh Hoard could have been worn by high-seated churchmen, but they are more likely to have been worn by lords. Who owned or created them remains unknown, but the chalice and the other pieces in the hoard were brought together and then buried under a ringfort, most likely for safekeeping. Although it is not known exactly why this hoard was buried and left underground, the most popular theory is the fear of a Viking raid during a time when these incidents were at their peak. Monasteries that contained these kinds of impressive ecclesiastical vessels were prime targets. Whoever buried the hoard, obviously never came back to claim it.

This large two-handled chalice is made of silver, copper, and bronze, decorated with gold filigree panels and enamel studs. It measures 17.8 cm (7 in) high, 24 cm (9.5 in) in diameter, and 10 cm (4 in) deep, consisting of over 350 separate parts. The silver bowl and base are separate, with a cast bronze stem in between. These three pieces are joined by a copper bolt. Blue and red enamel studs are visible under the handle, around the gold panels circling the rim, and around the girder.

The handles are intricately designed with glass studs and gold filigree panels. Even the underside of the base has been impressively decorated with gold. A polished rock crystal sits in the centre, covering the copper stem. There is even a mirror kept underneath the stem at the National Museum of Ireland so that the base can be appreciated.

A gold circular medallion is placed at the centre point on both the front and back of the chalice. The filigree panels contain images of animals and spirals, along with repeated abstract patterns. The Latin names of eleven Apostles, as well as Saint Paul, are engraved below the gold filigree band at the top. The letters resemble some of the initials that feature in a manuscript c. 710-720 CE known as the Lindisfarne Gospels, found on an island off the coast of Northumberland in northern England. This is one of the reasons why the chalice is believed to date back to this period.

The style of this vessel could have been borrowed from Late Antiquity and can be compared to a goblet from East Lothian, Scotland. Former director of the National Museum of Ireland, Raghnall Ó Floinn, states:

[The model of the chalice] is Late Roman tableware from the early centuries AD. It has parallels not in Western Europe but with Byzantine vessels now in St. Mark's in Venice - not because there is direct Eastern influence but because they both draw on a common Roman ancestor. (A history of Ireland in 100 objects)

The Hoard was transferred from the Royal Irish Academy to the National Museum of Ireland, shortly after the museum opened in 1890 CE.

There are different stories as to who discovered the hoard and the exact date it was found. Unlike in the case of the Derrynaflan Hoard, which was found in the 1980s CE, the National Museum of Ireland was not around to set up a staff excavation after discovery. Some of the details are often disputed. The account that most people rely on was given by the vice-president of the Royal Irish Academy, Lord Dunraven who visited the site shortly after the hoard was discovered in September 1868 CE. However, he did not give a lecture on his findings until February 1869 CE.

Although the facts cannot be proven, an article published after the lecture in the Dublin Weekly Nation on 27 February 1869 CE mentions a man named Jimmy Quinn as discovering the hoard, stating:

On 17 September 1868, a son of Mrs. Quinn was working at the rath and perceived a portion of ground to be softer than the rest. He put in his hand and pulled out one of the brooches and then the rest, exclaiming as he did: “Oh. Here are the Devil's horns”, he pulled out a larger vase and a small chalice-shaped cup. (Ó Flionn, Talk on the Ardagh Chalice).

These 'Devil's horns' refer to the brooch pins. Stories do talk of a man named Paddy Flanagan, who worked for the Quinns and was apparently with Jimmy on the day the hoard was found. While he continued to claim he was the actual finder of the hoard, there is no way of proving this. As the Quinns were renting their land from an estate owned by the Sisters of Mercy, the hoard was claimed by George Butler, Bishop of Limerick. Butler provided the Quinns with IR £50 ($75) for discovering the hoard.

In 1878 CE, Bishop Butler apparently accepted IE £100 ($150) from the Royal Irish Academy for the hoard, although some unproven stories do claim that he was given IE £500 ($750). It was transferred from the Royal Irish Academy to the National Museum of Ireland, shortly after the museum opened in 1890 CE. The chalice can still be seen there today. Throughout the years it has been included in different Irish exhibitions such as one in Limerick in 1950 CE and in Cork in 1977 CE. It has even toured the United States as part of the 'Treasures of Early Irish Art' exhibition.

The discovery of the chalice went on to revive the popularity of Celtic art in the 19th century CE, which is still popular today. This includes the use of flowing, interlacing geometric patterns on jewellery to display the shapes of vines and leaves.

Even though there are many questions regarding the background and discovery of the Ardagh Chalice that may never be answered, its importance to the Irish people today is clear. As one of the most celebrated Irish artefacts, in 1928 CE, the Ardagh Chalice was chosen as the template for the Sam Maguire Cup, which is awarded to the annual winner of the All-Ireland Gaelic football championship. The O'Duffy Cup, awarded to the winner of the Gala All Ireland Senior Camogie Final and updated in 2007 CE, is also based on the style of the Ardagh Chalice.

Besides the copies of the chalice made for sporting events, its popularity is evident in stamp collections featuring an image of the chalice, the jewellery based on its design that is still popular today, and commemorative festivals such as the Ardagh Chalice Festival that took place in 2015 CE, celebrating the 150th anniversary of its discovery. In 2018 CE, the National Museum of Ireland received over 1.2 million visitors, and the Ardagh Chalice is probably the most celebrated artefact in the entire collection.

Jenny Snook
Jenny is an Irish freelance writer with an MA in Archaeology and Heritage. She's worked as a researcher at the 'National Museum of Ireland: Archaeology' and has three years experience writing as a content executive.

The Derrynaflan Hoard is a collection of Irish altar vessels dating...
Definition

Ireland is an island country located in the North Atlantic, bounded...
Article

The Hoxne Hoard is the largest cache of late Roman gold found anywhere... 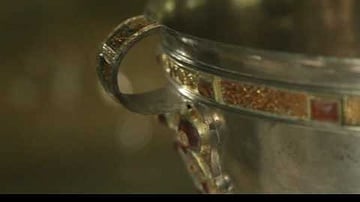 This chalice dates from the early 9th century AD and was found...
Image

A close-up photo of the Derrynaflan Chalice, an 8th or 9th Century...
Image

The Derrynaflan Chalice is an 8th or 9th Century vessel from the...

Written by Jenny Snook, published on 18 November 2020 under the following license: Creative Commons Attribution-NonCommercial-ShareAlike. This license lets others remix, tweak, and build upon this content non-commercially, as long as they credit the author and license their new creations under the identical terms. Please note that content linked from this page may have different licensing terms.